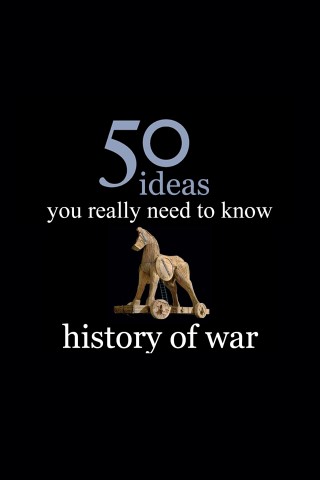 50 Ideas You Really Need to Know – History of War

Human history - from the empires of the ancient world to the superpowers of the 21st century - has been inextricably shaped by conflict and the weapons that have been used to wage it. The technologies that have produced advanced civilizations have also been harnessed to the grim business of warfare. This short history, stretching from the chariot to the Stuxnet virus which disabled Iran's nuclear enrichment programme, charts some of the most significant weapons, fortifications and tactics that have been developed in the last 2,500 years.

This scintillating introduction to the world's most enduring phenomenon ranges from The Egyptian New Kingdom to contemporary hi-tech warfare ̶ via Alexander the Great; Roman siegecraft; Kingship and command; Cavalry and castles; The age of chivalry; Siegecraft; The age of Vauban; The age of Frederick the Great; The Seven Years' War; Colonial conflict; Napoleon and Nelson ; The rise of the Dreadnought; Steam and steel; Trench warfare; D-Day; Air warfare; and The Manhattan Project.